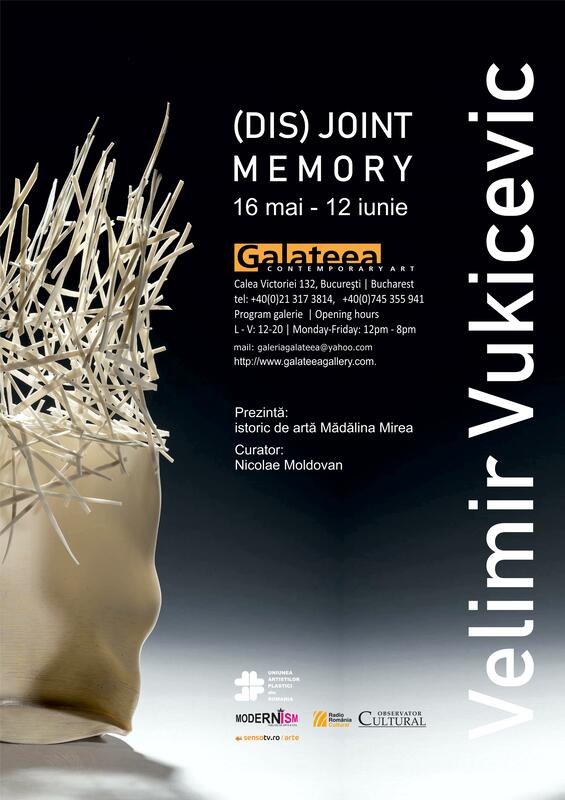 Exhibition can be visited in the period  May 16 - June 12, 2019.
Free entrance
​
Media Partners:
Observator Cultural, Modernism, Radio România Cultural, Senso TV – Arte, Agenția de Carte, Cultura, Art Clue .
Galateea Contemporary Art  Gallery  has the pleasure of inviting you, on Thursday, April 16, 2019, at 7 pm, to the opening of the solo show (DIS)JOINT MEMORY  by Velimir  Vukićević, a ceramic artist from Serbia.

"The works of Velimir  Vukićević.take up of one the most prominent places in former Yugoslavian and Serbian art of contemporary ceramics. He is the artist who has understood the essential questions that modern art poses from the very moment he entered ceramic art with his first works; he is capable of looking for the right answers in compliance with the spirit of the times. Here we speak of resourceful personality, curious spirit, of developed capability of accepting tradition, questioning experiences, and thirst for truth in his own statements. The works of  Velimir  Vukićević originated from exploration and struggle, with belief solutions are not only to be found in given definite forms and their possible modifications, but also in searching and in composing a core from which a form has to be upgraded.
Velimir  Vukićević academy – trained ceramic artist, educator, professor at the Faculty of Applied Arts for many years, member of the International Academy of Ceramics – IAC and ULUPUDS – bears witness to an exquisite creator and continuous presence in significant solo exhibition cycles and important international group exhibitions in the area of contemporary ceramic art. Overcoming characteristic perception of ceramics as an expression of utility and decorative ceramic creation,  Vukićević promotes an expanded function and problem – like comprehension of form and surface. This position of his has been apparent in his creative work since the very beginning.
This exhibition consists of several layers which build up a story about personal and creative memory of the author. Exhibition comprises of several groups of works done in porcelain, an old Eastern technique that by its mass structure, its unpredictability during modeling, drying and firing entails great experience, skillfulness and persistence on the part of the artist, who leads the shaped model to its final interpretation, intricacy, transparency and perfection. Opus varies between miniature forms, Gothic and vital verticals, mystical and disintegrated boxes that make an illusion of inner space and suggest secrets of a playful story, lavish forms of plates with potential winding lines made of materials and open, minutely detailed forms which are associated with filigree art of paperfolding – origami. Material used for making sculptures has been maximally thinned, which is so captivating. Subtile circular or broken winding of porcelain surface lines in space relate to lyrical abstraction in geometric modality, i.e. to drawing done with sharp pencil or ink on paper. Line flows and wawes in vital, round forms, it twists, it bends and becomes round , or it melts and disintegrates in cubistic manner of broken forms. Some parts of sculptures are emphasized with variations in colour and texture.. Basically, each object is constructed according to lines that define contours of the main forms, and with further development of the artwork they become colored surfaces, as emphases on white. Drawing made of materials as a primary linear and three - dimensional image presents also the artist’s concept, thinking, intentions, emotions and fantasies.
The works of Velimir  Vukićević are deeply and delicately emotional and fulfilled with mystical expression and a kind of message where one can sense a breeze of Far East culture and remote, yet present association, with fragile origami".
Gordana Biba Marković